Supported by the Heritage Lottery Fund over three years (2013–16), The Missing Chapter: Black Chronicles is Autograph ABP’s ongoing archive research programme, with the mission to bring together a body of photographic portraiture to highlight diverse ‘black presences’ prior to 1948, especially in Victorian and early Edwardian Britain. Since 2014, the earliest photographs portraying people of African, Caribbean and South Asian descent in Britain were identified through new curatorial research, and by working collaboratively with national archives and collections, both public and private. In addition to in-depth archive research, The Missing Chapter programme has produced a range exhibitions and events, formal and informal learning, site-specific image projections, and the publication of a series of educational and scholarly resources in print as well as digital media.

The first major public output for The Missing Chapter was the critically acclaimed exhibition Black Chronicles II – produced in collaboration with our main research collaborator, the Hulton Archive, a division of Getty Images.  The exhibition premiered with more than 200 photographs at Rivington Place in 2014 before touring to the Cooper Gallery at Harvard University’s Hutchins Center in Boston, and Spelman College Museum of Fine Art in Atlanta. The programme’s second collaborative exhibition ‘Black Chronicles: Photographic Portraits 1862 – 1948’ was on view at The National Portrait Gallery in London between 18 May – 11 December 2016.

We recently published Black Chronicles: Exhibition in a Box, a pop-up archive photography display and versatile learning tool-kit, and developed the The Missing Chapter Web App, which offers online access to a range of portraits in a specially designed digital environment, featuring a simulated wet darkroom and dedicated exploratory, interactive cross-curricular teaching zone. The associated Black Chronicles book and newspaper broadsheet are currently in development, and scheduled for publication in autumn/summer 2017.

The photographic portraits in The Missing Chapter portfolio offer a unique (visual) insight into a diversity of black lives and migrant experiences during the decades following the official birth of photography in 1839. The programme’s core research remit is locating and identifying the earliest photographs taken in Britain of sitters from culturally diverse backgrounds, primarily those of African, Caribbean and South Asian heritage. While some were merely ‘passing through’, the photographs represent a diverse range of people, from visiting performers, politicians, dignitaries, servicemen and women, royalty and missionaries, to society personalities and many as yet unidentified individuals living and working in Britain at the time. Their collective presence bears direct witness to the nation’s colonial and imperial history and the expansion of the British Empire during the nineteenth and early twentieth century. Produced in commercial studios during the latter half of the 19th century, many lay buried deep within the archives for decades until 2014 – unseen for more than 125 years. They reveal an important, complex black presence in Britain before the SS Empire Windrush steamship arrived in 1948 with nearly 500 Caribbean migrants, a moment traditionally cited as the key moment in the emergence of a multicultural British society. The Missing Chapter project aims to gently readjust this historical narrative.

More than 500 images have been identified since 2014. Our research is made possible through working in close partnership with national institutions, ‘extracting’ relevant images from their existing cataloguing database or, where possible, looking into the archives for the first time.  A majority of the images unearthed as part of the project’s initial research phase came from the Hulton Archive, a division of Getty Images, which holds the surviving glass plate collection of the London Stereoscopic Company, the largest and most commercially viable photographic business operating in 19th century London; more than 100 glass plates and prints have been digitised, and exhibited since 2014.

Most recently we have had the privilege of accessing specialist collections such as the Royal Collection Trust at Windsor Castle; the earliest images represented in the The Missing Chapter portfolio have been identified in their collection, though research is ongoing. Other research alliances were made with private collectors, who have kindly lent work to The Missing Chapter programme for digitisation and exhibition; these include individuals such as writer and photographer Val Wilmer, as well as Paul Frecker’s Library of Nineteenth-Century Photography, a commercial image resource. Key advocates include art dealer and researcher Michael Graham-Stewart, whose generosity and expertise has been invaluable in the project’s early stages, as well Jenny Allsworth, antiquarian and rare bookseller; both have helped us acquire photographs from their collections for our own archive, which now holds more than 50 original 19th century cartes-de-visite and cabinet portraits as part of its permanent Archive and Research Centre collection. These recent acquisitions were made possible through a Collecting Cultures grant from the Heritage Lottery Fund.

– Renée Mussai, Curator and Head of Archive, at Autograph ABP 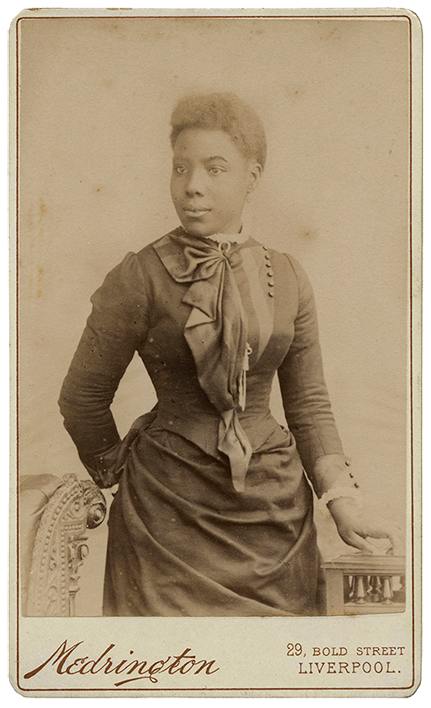 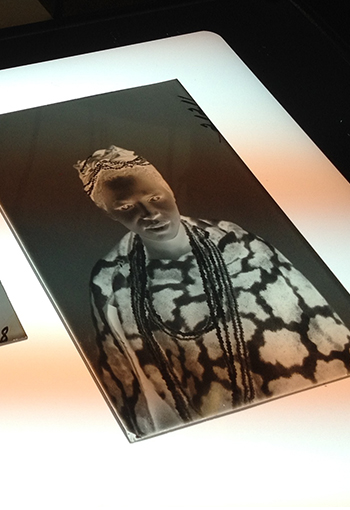