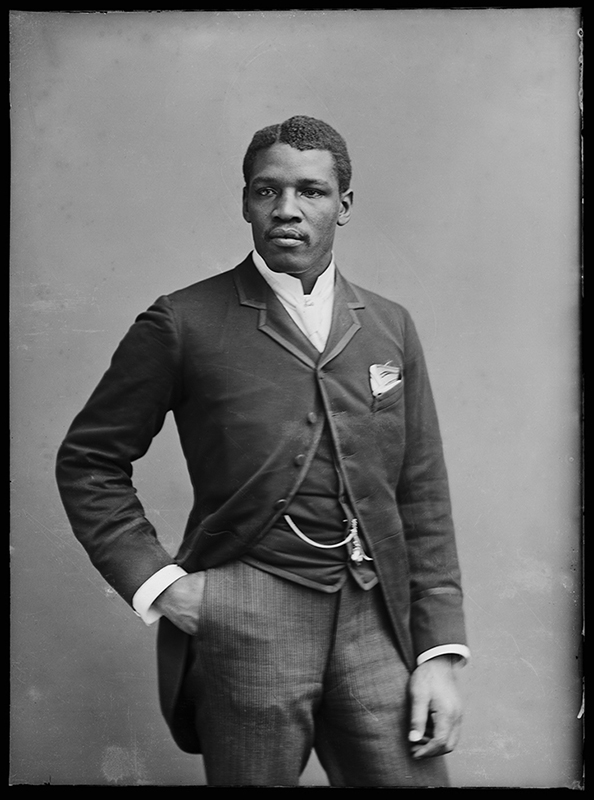 Peter Jackson (1860–1901), also known as ‘The Black Prince’ was a heavyweight bare-knuckle boxer with a successful international career. Born on the island of Saint Croix, then the capital of the Danish West Indies, he left his native Christiansted in 1878 as a sailor, intending to find his older brother who had earlier left for New York. He soon emigrated to Australia where he was trained by the famour Sydney boxing figure Larry Foley. In 1886 Jackson claimed the title of Australian heavyweight champion. Jackson fought twenty-eight of the best boxers from England and America between 1888 and 1892, losing to none. He was celebrated as the ‘Coloured Champion of the World’. In 1889 he famously fought, and defeated, reigning champion Jem Smith at the Pelican Club in Soho, London. Jackson was one of the best boxers never to fight for a world championship: Americans John Sullivan refused to defend his title gainst a black man and James J. Corbett equally avoided Jackson once he gained the heavyweight crown in 1892. Jackson was unable to obtain any fights after 1892. In 1893, he appeard in a touring theatrical production of Uncle Tom’s Cabin, based upon Harriet Beecher Stowe’s wildly popular 19th century novel – only the second black man to play the role of Uncle Tom. He is buried in Toowong Cemetery in Brisbane, Australia, where his grave is marked with the words ‘This was a man’, citing Shakespeare’s Julius Caesar (whose work he is said to regularly have quoted verbatim).